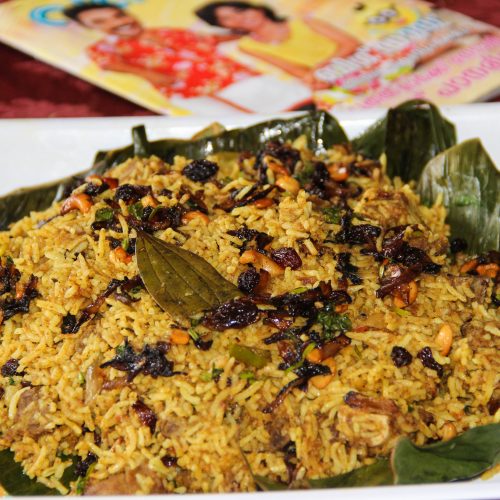 Try out this special Syrian Christians’ mutton biryani cooked in dum, flavored with rich coconut milk and meat stock, & wrapped in plantain leaf which lends its earthy aroma to the dish. This lip smacking biriyani is served with a side of raita & guarantees to take your taste buds to a gourmet’s heaven.

1Clean and wash the mutton pieces. Allow them to drain.

2Marinate the mutton with turmeric powder, chili powder, garam masala powder, and salt. Keep it aside for at least 2 hours.

3In a heavy bottomed vessel, melt butter and fry the bay leaves, cardamom pods, cloves, and cinnamon. Add the soaked rice and fry for 2-3 minutes until the rice becomes crisp, making sure not to brown the rice.

4Add 6 cups of boiling water, lemon juice, and salt and allow it to boil.

5Cover and cook for about 5-10 mins until the rice is half cooked and no water is left. Remove from flame and keep aside.

7Add the marinated mutton, mix well, and fry for 5-6 mins until the color changes.

11Clean 2-3 large banana leaves. Wilt it slightly by placing them on flame and flipping the sides to make them soft & pliable. Smear some ghee on the leaf.

12Place a layer of the mutton masala with little gravy as the bottom layer and top it with a layer of rice. Garnish with cashewnuts, raisins and fried onions. Sprinkle ghee over the layer.

13Wrap the banana leaf as a parcel and tie it securely with banana fiber or thread. Repeat the process with the remaining mutton masala and rice on the next banana leaf. Place the parcels in a steamer and steam cook the biryani for 10-15 mins.

14Remove from the steamer and keep it aside for another 5 mins. You could also bake the parcels in a preheated oven at 300 degrees for 10 mins.

15Serve with raita and pickle of your choice.