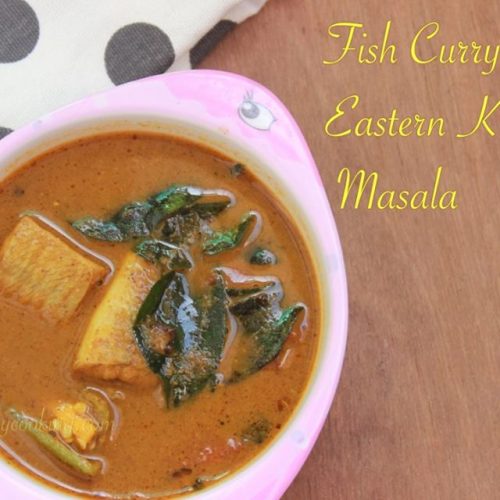 1Peel the Onion and Garlic, roughly chop them, fry them in a dry pan.. once they got shrieked from the heat, remove from the pan and set aside to cool completely.

2Take Jeera, Pepper, Methi(vendhayam), Mustrad, fry them till they pop out, no need to add oil, just dry roast them.. and allow this cool along with the onion

3Heat the pan with 2 tsp of oil, Add in the coconut and curry leaves

6Remove the coconut mix and allow this cool, roughly chop one medium sized tomato and fry them with a tsp of oil

7Cook tomatoes till they turn mushy, cool up and grind the masala along with the mashed tomatoes.. you need to ground the masala to a very fine paste

8Wash and clean the fish in running water

9Add tamarind juice to the fish

10add grounded masala & salt.. add some water if needed.Mix them up, start cooking it

11once you see the gravy get to boil, put the flame to medium cover the pan with a id, allow this cook for 10-15 mins or till the gravy simmer to your consistency

12Here is the Tempering ingredients, crush the garlic, chop the tomatoes slit and cut the green chillies.. if you want you can chop the curry leaves too

13Heat a pan with oil, Pop up the mustard and methi seeds, fry the Crushed garlic, green chillies and Tomatoes

14Tadaaa, transfer the tempering tot he fish curry.. all done