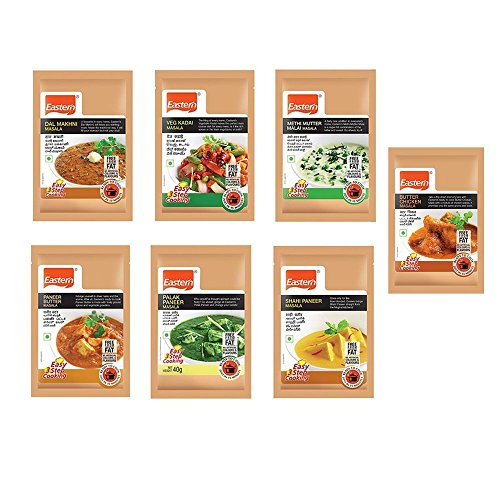 Eastern presents the Easy 3 step cooking with our Ready to cook series.

Dal makhani masala
A flavorful and creamy staple in every northern indian home, eastern brings you the same aroma, taste and rich texture with its special dal makhani. Cooked just the way you remember it – with a variety of lentils and rajma. Pair it with steaming hot rice, and you’re home
Butter Chicken Masala
Eastern’s ready-to-cook Butter chicken is made with a special mixture of magical spices to bring you the taste, which is still fresh in your memory. Pair it with any of the indian breads and let the food times begin

Veg Kadai Masala
Ttreat your senses with eastern’s vegetable kadai. A rare mix of assorted spices, natural vegetable powders and pure goodness of punjab. Serve it with tandoori roti, naan, kulcha, paratha or any other flat indian bread and lose yourself in its taste

Palak Paneer Masala
Eastern’s palak paneer seals the same aroma and taste exclusively for you. A mix of spinach, paneer ( cottage cheese) and condiments, this mildly spicy green gravy is the most sought after dish in every gathering.

Shahi Paneer Masala
Eastern brings you the shahi paneer. Made with cottage cheese and tomato based spicy gravy. It is a traditional recipe that has been followed since the time of the mughals. Enjoy it with a variety of indian breads and feel royal

Methi Mutter Malai Masala
eastern’s methi mutter malai is a delectable combination of bitter and sweet tastes that complement each other naturally. Cook it in a rich cashew based gravy along with a mix of selected spices. We’re sure you will love it.

Paneer Butter Masala
Eastern Brings you paneer butter straight out from the by-lanes of Punjab. The perfect combination of spiciness and creaminess of its gravy.