Express your love for your Father at this Fathers Day and win exciting prizes from Eastern. 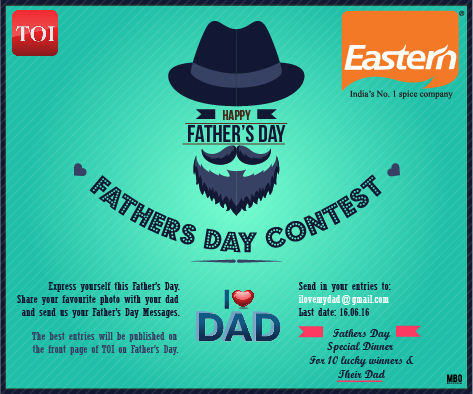 The Contestant agrees to provide complete and correct information with respect to his/her identity, contact details, location, age, and such other information as may be required.

2.The contest is open to all Indian citizens with the exception of employees, their immediate family members, agents, distributors, retailers and any other channel partners of ECPL, The Times of India, Le-meridien residing anywhere in India and abroad

5.The contestants have to use the hashtag #IloveDad and tag Eastern.

6.Ten  lucky winners and their dads will get a father’s day special dinner and an exciting gift hamper from Eastern.

7.The winners will be announced on Eastern’s social media accounts and the entries will be published on the front page of The Times of India  on 19th June, Father’s day.

8.Winners will be required to send in their contact details to loveyoudad2016@gmail.com or to the social media accounts of eastern.

9.The Prize shall not be transferable / redeemable. No request shall be entertained in this behalf.

10.The decision of the judges in terms of selection of winners will be final and will not be subject to any further discussion/debate

11.Eastern /The  Times of India  reserves the right to change/modify terms and conditions and/or criteria of the Contest at any time at its own discretion and without any prior notice and without assigning any reason.

12.Posting of any spam, foul, indecent, threatening, business promotion, discriminatory and/or false comments would lead to disqualification of the participant from the contest, at the sole discretion of Eastern/The Times of India

13.Eastern condiments/The Times of India  shall not be responsible for any loss, damage, theft caused to the Prize(s) after handing over the same to the winner/ his/ her assign(s).

14.In case of any dispute or difference in respect of this Contest, the decision of Eastern Condiments / The Times of India’s shall be final.